It is already available at Clouding.io the Ubuntu 17.04 image, baptized as “Zetsy Zapus”, following alphabetically the last version “Yakkety Yak”. So you can already create VPS Servers with Ubuntu 17.04 as with your operating systems.

The novelties that Ubuntu 17.04 brings up

Although Unity 7 will still be the default environment, you will be able to select Unity 7 or Unity 8 on the screen to log in: 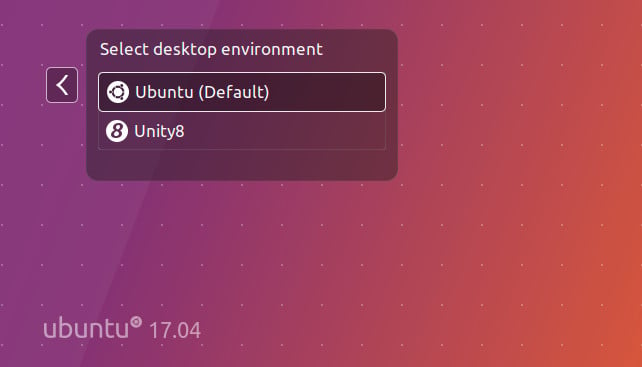 In case you don´t know this, we inform you that Unity 8 is the new desktop version of Unity for Ubuntu and will come along with the Mir display server.

Do we need a swap area, that also doubles the size of the RAM? This has been one if the more frequent questions in the Linux world over the past few years.

The thing is that Linux distributions use a swap area to free RAM in order for your system to work better. But this was more useful when RAM was available on MBs, which is no longer possible. Therefore, dedicating a whole area of 4-8 GB for swapping doesn’t make sense nowadays.

Canonical (Ubuntu´s parent company) has taken this into account. Starting on Ubuntu 17.04, the swap areas will be substituted by default swap files. The swap files will not use more of the 5% of the free disk or 2GB (any of those, the lower). The reason behind this is pretty obvious:

Nowadays, recording one area and keeping twice the RAM size to swap does not make sense any more. For a normal machine, most of the time this swap will not be used at all. Or if the mentioned swap room is in use and has an appropriate size, changing its place in retrosprect is painful.

End of the 32-bit-PowerPC support

Ubuntu 17.04 includes Linux kernel 4.10, which is known for stressing out the performance of Intel Kabe Lake and the AMD Ryzen systems.

Snaps packages of the new Ubuntu distribution will be more abundant, although for now will not replace the apt.

Remember that you can´t update Ubuntu 17.04 from Ubuntu 16.04. You will have to first update to Ubuntu 16.10 and then move on to Ubuntu 17.04. And we don´t recommend this to you. Updating both versions will give you problems, besides the long time you will invest in it.

You have two ways to do it:

Lastly, we leave you here the releasing notes of the Ubuntu 17.04 version.

This is what you have to do in order to update in a server system: